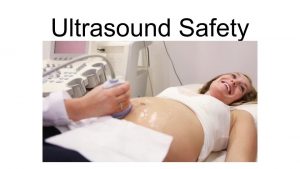 One of the many questions I get during a scan is whether or not ultrasounds are safe for the baby. I’ve actually been told to cut the scan short because they didn’t want their baby exposed to ultrasound. I’ve also had a surprising amount of people ask me if there is radiation involved with ultrasound. Fear no more! I’m about to put those worries to rest.

First, let me start out by saying…NO, ultrasound does not use radiation. We may be located in the radiology department but we don’t use radiation. That actually makes ultrasound safer than x-ray, CT, nuclear medicine and mammography. Ultrasound uses a high frequency sound wave that travels through tissue, bounces off the tissue and returns back to produce an image. Bats and submarines use the same technique to visualize their surroundings. The sound wave is so high that we can’t hear it so babies can’t hear it within the womb either. The only thing they’ll experience from an ultrasound is the sensation of someone poking and prodding at them from the mother’s stomach.

Are they safe though?

There have been many studies over the course of 40 years on the effects of ultrasound. The biggest discovery they have made is that over a very long term exposure, the tissue can heat up. Sound waves cause vibrations. You can see the big vibrations if you’ve ever seen the speakers on a car with a loud stereo system. The higher the frequency, the smaller the sound wave, which means smaller vibrations. No matter the frequency, sound waves carry vibrations. Vibrations cause friction if they’re traveling through a medium (like tissue). It would take a very long time for tissue to heat up…we’re talking days, way over your average thirty minute scan. Although it would take a while for those effects to take place, sonographers try to use the lowest setting possible for the safety of the baby. That is why it is important to always seek out a professional sonographer who has been trained to know which settings are safest for babies and for you.

Several studies have verified that it is a non-invasive tool with vast benefits. Specific studies can be reviewed on Dr. Joseph Woo’s renowned site www.ob-ultrasound.net, a highly respected source of information in the field. These studies confirm that no adverse findings of diagnostic ultrasound levels have ever been replicated. In fact, new studies are showing its psycho-social benefit for expecting women, where viewing an ultrasound resulted in benefits from improved diet to smoking cessation.

Keep in mind that studies are still being done on the effects of ultrasound exposure but medical professionals have used ultrasound as their go-to modality for checking fetal well-being for decades now. The benefits greatly outweigh the risks. The FDA has stated to minimize the amount of scans done during your pregnancy as a precaution. However, there are instances where those extra scans are more important to a mother/family. There have been many times where we have had people come in for a scan and we have found accidental findings which have resulted in a better outcome for the mother and baby. Those who have previously miscarried, lost their baby or have had problems conceiving often seek us out to enjoy those special moments with their new little one growing inside of them and to be able to have that peace of mind.

We are trained professionals and we use the safest settings and never leave you exposed to ultrasound longer than necessary.

In ultrasound school we had to practice scanning each other. From someone who has had several ultrasounds done weekly for a year and a half I can assure you that I am as healthy as I was before and I am not a radioactive mutant…that would be pretty cool though!

Want to join the discussion?
Feel free to contribute!

Welcome To The Sneak A Peek Blog! How To Get The Best Ultrasound Possible